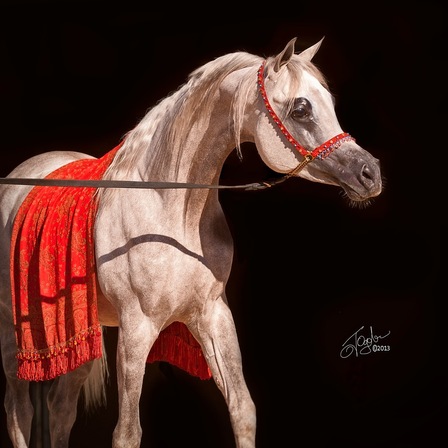 We are all "enlightened" by the journey of this spectacular young stallion.  Born prematurely, his life from the beginning hung in the balance, and could so easily have been lost, but fate came into play.  ILLUMINATUS had two special people in his corner.  Following months of diligent care, including several sugeries, he joined the herd of Athala Arabians.

In 2014, ILLUMINATUS lived up to his name, just like his two special people, Athala King & Maureen McCormack, knew he would.  His first two foals, in his first breeding season to two maiden mares pregnant on first attempts.  He "enlightened" the world with his gifts of two spectacular foals.  ILLUMINATUS is writing his legacy, now is your hcange to be a part of this special journey, join the ILLUMINATUS story and be enlightened.

At the heart of every Arabian horse owner is the search to bring out the true essence of the Arabian in all its glory, beauty and nobility. That search now leads to one magnificent young stallion, A Illuminatus who "lights the path" to the treasures of the Arabian horse.